In the last project of our first year, we had to create an “Art Installation” for Makers Festival Twente. We had to design a mechanical chain reaction that would trigger a game, once the game is finished it should start a new chain reaction. The Main theme was the movie Metropolis and the second theme was a theme park.  The target group of the festival is children from 4-12 years old. We built the machine with several theme park elements in it like a slide, Ferris wheel, and a pirate ship. One of the rides is broken, and this is where the game starts. The player has to repair the plumbing system of the ride to make the reaction continue.  The theme park rides represent the wealthy world and the plumbing pipe system represents the underground workers of Metropolis. I was the only engineer who worked on the game. The game is made in GXPEngine. To let the chain reaction start the game we used an Arduino Uno. In the video, you can see a swing with a contra weight, in the axis of the contra wade we put a rotation sensor if the sensor got turned the Arduino will output a keypress which will start the game. If the game is finished it will send a serial signal to the Arduino and this will make a small motor turn around which releases a ball. Since the festival has a young target audience we tried the keep the game simple but fun. 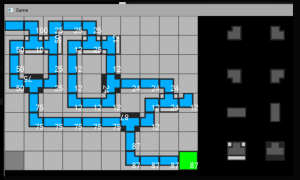 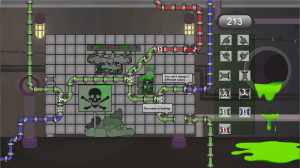 Mechanical Chain Reaction and The Game